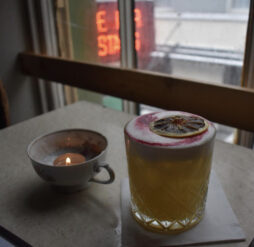 Upstairs at Arthur Mayne’s is a small Intimate space in a building that was constructed in 1720. It’s deeds refer to the building as having orchards and a boat house, the River Lee then running down the South Mall and the city yet to grow eastwards.

The various owners names over the last 300 years and their occupations bear witness to Anglo Irish Ascendancy, the Act of Union ,the American civil war, religious emancipation, home rule ,universal suffrage, world wars and the Irish Struggle for independence. Notably this space survived the burning of Cork in 1920.

We have strived at Upstairs to leave as much untouched as possible and the space remains true to its origins, Most recently the willow pattern restaurant and now a discreet cocktail spot we invite you to share us this unique atmosphere , the march of time continues, and you’ll find the best craft cocktails in the city right here. Food served until late 7 nights a week.

Check out our latest video to get an idea of what’s going on Upstairs!