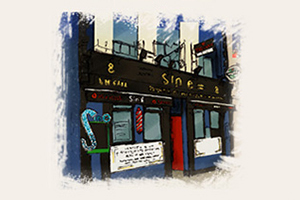 The long-established home of Irish traditional music in Cork city, the Irish words ‘Sin é’ literally translate to mean ‘That’s it’, in reference to the funeral parlour located next door. Sin é is widely viewed as the best traditional pub in Cork!

Non-stop traditional music 7 days a week from 6 – close Monday – Saturday, and from 5 on Sunday. Music and Drink are the focus but please feel free to bring some food with you! (hot food not allowed)

Voted one of the best places in the world to spend St Patrick’s Day, read more

Having first opened its doors in 1889, the pub has always been an intriguing spot – to say the least – and has a very devout and widespread following of people, patrons that hail from every different sort of background.

The Sin É doesn’t tolerate egos particularly well and respect is shown to all who show respect to it and its patrons. Roots run deep here, with generations of families from the locality mixing easily with newcomers and tourists. The truth is that you can’t be a blow in at the Sin é – you either dig what’s going on or you don’t.

Traditional music has always been played at the pub, even when it was seen as uncool in the 1950s, 60s and 70s; and unlike the tourist sessions that pop up in other pubs during the summer, the Sin É has had live Irish music every week for over 50 years now. We host a Trad Session 7 nights a week at 7pm – truly a must for any music fan! The best of Irish is always heard every Tuesday at 9.30pm as well as Fridays and Sundays at 6.30pm, whatever night of the week you arrive – good music is guaranteed, we also suggest that you carry on late into the night with live music in Crane Lane

The Sin É loves Stout, Horse racing (more about that later), Cheltenham week, Traditional music, Reggae (it started in Cork, just ask the bar man!), Rock and Blues, Conversation, Singing and maintaining folks’ hopes and dreams. We’re very much a community, so cross the river Lee and join us!

Coburg Street was once known as Maddens Field and was an overnight holding pen for live animal exports to England – hence the street narrows on the eastern side. The equine link is even stronger within Sin É’s walls as the ground floor was once the premises for a wheelwright, while the upper floors were given over to a Saddlemaker and for accommodation.

More recently, the pub had a Barbers shop upstairs and the chairs and mirrors remain in situ. Pitch and toss is played in the lane and have a quiet word with the Staff about the ‘Sham Fishing’. Check out the wooden seats inside the front doors as many visitors have reported strange visions in the woodwork – some of them even whilst sober!

Don’t leave without taking a look at the gable end of the building where there is a wonderful carving inspired by Austin Clark’s poem, ‘The Planters Daughter’. An ode to the owner’s wife and possibly a peace offering, it was carved by Hadrian Broadley and is quite unusual in that it’s a head stone with a cut known as ‘Cork Cap’, something especially reserved for clergy.

Pass a few blissful hours upstairs in the quiet, accompanied by a pint and Conal Creedon’s ‘Passion Play’. This book evokes the spirit of what remains of some of the most special areas in Cork city – and it’s bound to given that the legend himself lives but the soft hum of a song away. It’s neither city or county – it’s just pure Cork.

Past, present and future rest easy with each other at the Sin É…