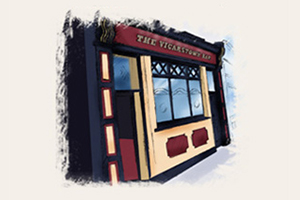 Old in character but with a modern twist, The Vicarstown Bar follows in the great Irish tradition of pub owners naming their premises after the village or townland that they themselves originated from.

Cork has plenty of examples including the Avondhu, the Iveaghleary, the Ovens bar, the Berehaven and the Caheragh bar – and the Vicarstown Bar is part of this tradition, having been named after an area just north of the city.

The pub’s long and narrow dimensions are typical of the medieval footprint of the city around the time it was built. You can see many centuries worn on the face of its Beer Garden walls – a beautiful sun trap in the summer. The Vicarstown adjoins the newly refurbished and reopened Black Dog.

The Inn has a fish tank alongside a cool DJ set up both inside and out. Loved for its dark corners, trade mark beer garden and smoking area rivaling that of the Crane Lane Theatre, and its popularity as one of Cork’s best late night venues Thursday – Saturday this pub really is a Manhattan dive gone home to meet its cousins. Margarita Monday’s have proven to be a hit here, with two Margaritas for the price of one.

Many a customer has spent hours within its walls reading Kevin Barry’s City of Bohane (the book’s city is unnamed, but it’s got to be Cork…), and it’s especially worth taking a seat on the street and observing the exotically mundane buzz of North Main Street.